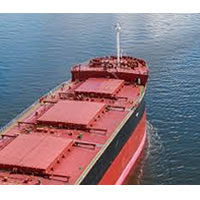 The Baltic Exchange’s main dry bulk sea freight index on Monday fell to a two-week low on declining rates across all vessel segments.

The overall index, which factors in rates for capesize, panamax, supramax and handysize vessels, fell 122 points, or 3.1%, to 3,822. That was its lowest since Aug. 17.

Among smaller vessels, the supramax index extended its fall to 55 points at 3,293, its lowest since Aug. 20.

Iron ore prices tumbled more than 6% on Monday on rising portside stocks of the steelmaking ingredient in China owing to increased shipments and weak domestic demand.