Gas will be the most resilient of the fossil fuels through the transition, a relative winner because of its low carbon intensity on burning. That’s the conventional wisdom as well as our Global Gas team’s view. Yet with radical change set to sweep through energy markets, the industry can’t be complacent about its future.

Gas will have to contend with intensifying competition among fuels, disruption from new technologies and decarbonisation policies designed to undermine fossil fuels’ dominance of energy supply. The risks to demand vary by region. Massimo Di-Odoardo, Head of Global Gas Analysis, took me through the team’s views on the three biggest markets.

First, Europe, where policy to reduce GHG emissions will continue to eat away at demand. Today, gas demand is around 500 bcm a year, 10% down from the peak a decade ago. Policy has already improved energy efficiency and incentivised renewables which have displaced gas (and coal) in the power market.

The EU Green Deal, to be enacted this year, targets hard-to-decarbonise sectors. The aim is to cut GHG emissions by between 50% to 55% by 2030 (the present target is 40%) and achieve economy-wide net-zero emissions by 2050. The residential, commercial and industrial sectors, which together account for two-thirds of demand, are in the Green Deal’s crosshairs.

We estimate 45 bcm, or 12% of gas demand, will be lost by 2040 across these three sectors, mainly to heat pumps, energy efficiency and hydrogen. New gas demand of 20 bcm from transport (CNG) and ship bunkering (LNG) may be a partial offset and contribute to CO2 reduction by displacing oil.

Europe’s overall carbon emissions will fall more than 40% by 2030 on our forecasts, but don’t deliver the Green Deal’s 50% to 55% target. That suggests downside risks to our European gas demand numbers.

Second, the US, where peak gas demand looms in the mid-2030s. Demand has boomed in the last decade, cheap shale gas squeezing coal out of the power market, winning market share in the industrial sector and sparking a renaissance in petrochemicals. Domestic gas demand growth, though, slows through the 2020s as these sectors become saturated and solar investment ramps up. LNG exports becomes the growth segment.

A Democratic election victory in November’s presidential election could see US gas demand peak much earlier. Joe Biden’s ambitious clean energy plan envisages a carbon-free power sector by 2035. Delivering a nation-wide zero-carbon grid in 15 years seems a tall order – Europe is still trying to do that 20 years on. But it’s a risk the industry can’t discount.

Finally, Asia, where hopes for sustained gas demand growth are firmly pinned. LNG imports of 340 bcm a year meet almost half the region’s gas demand. Asia’s economic growth and higher gas penetration will see LNG imports double by 2040. Coal still dominates the primary energy mix in Asia at around 50%, higher still in China; while gas use at 11% is less than half that in Europe and the US. 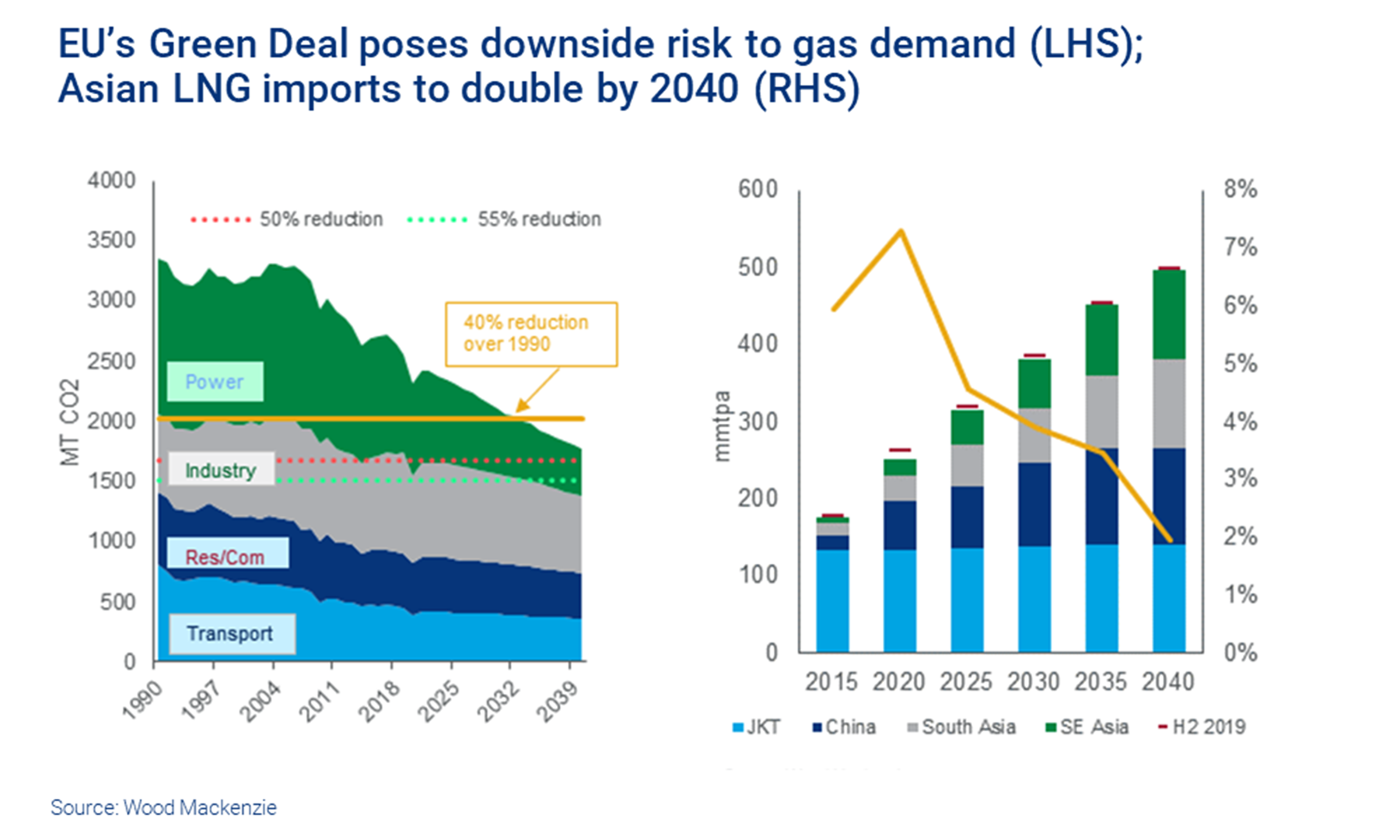 Gas should be the winner with air pollution high on the agenda for most Asian governments and decarbonisation strategies gaining traction. Developed Asian economies, such as South Korea and Taiwan, are already promoting gas over coal. Japan, where the government is considering retiring dozens of ageing coal-fired units, may shift policy in the same direction. China’s gas demand continues to grow through 2040.

The markets of developing Asia hold enormous potential, but gas’s growth is far from assured. Many countries lack infrastructure, and affordability is a challenge where imported gas must compete with domestic coal. India is a case in point. Gas has a market share of just 6%, well short of the government target of 15%, and is struggling to compete with coal and the rapid roll-out of renewables.

If the outlook for Asia is promising, the signs emerging in Europe and the US point to future risks. It may be some decades away, but global gas demand is going to come under increasing pressure from new technologies like hydrogen and CCS before the middle of the century.

Meantime, there’s a great opportunity for gas. The industry needs to use this downturn and low prices to ‘sell’ the merits of the product – that gas is plentiful, clean, reliable and competitive and should be a platform fuel to support sustainable economic growth for decades to come.
Source: Wood Mackenzie