The global dry bulk freight market — the largest commodity shipping segment by volume — has witnessed a rocky start to the year with earnings sinking and demand for moving raw material looking anemic.

The time charter equivalent (TCE) rates assessed by S&P Global Platts for Capesize, Panamax and Supramax vessels were much lower in the first week of 2020 compared with the rates registered during the same period over the past three years.
The fall in rates was contrary to expectations that IMO 2020’s 0.5% sulfur regulation would see a spike in freight levels due to clean marine fuel being expensive, with shipowners struggling to pass on the bunker cost to charterers.

Paltry TCEs
The dry bulk market has seen a bloodbath with the TCEs on some of the key routes across various segments of the market staying significantly lower during the first week of 2020 in comparison to 2017 through 2019, as seen in the table below. 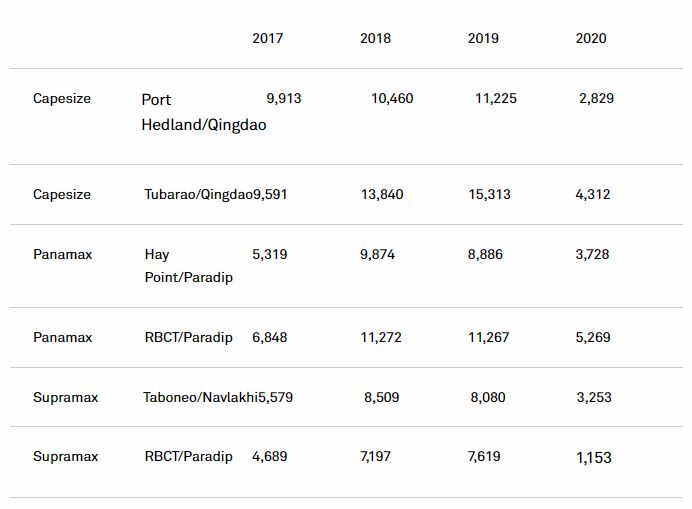 The freight rates in dollar per ton voyage basis at the start of this year were lower than the monthly average of December 2019. The transition from high sulfur fuel oil to low sulfur fuel oil for bunkers is yet to boost the freight levels as per earlier expectation. 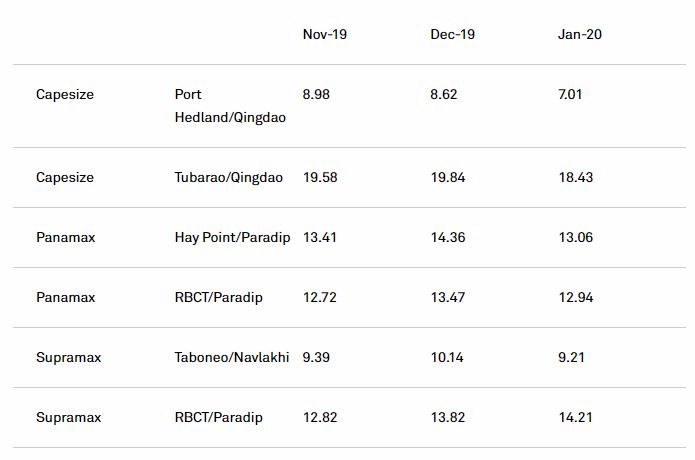 Typically, the freight market remains weak before the Lunar New Year holidays as demand wanes in the Far East and Southeast Asia. “The weakness in the market now is something unlike we have ever seen,” a market participant said.

Cargo flow contracts
The ebb in cargo flows toward the end of 2019 and early 2020 is being blamed by market participants for the current sluggishness. Grain cargoes out of the US Gulf Coast — historically the mainstay for the Panamax and Supramax markets during the fourth quarter — was lacking in 2019.

Also in the Pacific, demand for moving coal cargoes to India and China slowed toward the end of last year due to high inventories in both countries.

Coal stockpiles at Indian power plants hit 31.53 million mt in the week ended January 3, according to data released by the Central electricity Authority. Indian coal stocks were up by 20% on the month and 89% on the year.

In the Capesize market, it was a smorgasbord of factors, such as high iron ore prices, weather and port maintenances, that kept freight levels brutally low.

“So far, Brazil seems to be [witnessing] a lot of rain, which is slowing down the loading. While in Australia, the tropical cyclone joined climate disasters. The bushfire may affect the rail lines operations,” a Singapore-based shipbroker said.

Additionally, Vale’s Malaysia-based Teluk Rubiah Marine Terminal, which transships around 24 million mt of iron ore annually, will be closed for two weeks for maintenance, with cargo operations expected to resume only by the end of January.

Ambushed by booming bunkers
The implementation of the International Maritime Organization’s 0.5% sulfur mandate has pushed up LSFO prices substantially, which has squeezed the earnings of shipowners.

The shipowners would ideally pass the rise in bunker prices to charterers through higher freight rates. However, in the current scenario, charterers are unwilling to foot the higher bunker prices. Thus, shipowners have no choice but to absorb the cost of LSFO, resulting in lower TCEs.

Given the demand scenario in the market at present, if shipowners don’t accept the lower numbers, they may have to wait for over five days to get a possible cargo, a second shipbroker said.

In the Capesize market, expensive bunkers were discouraging owners from ballasting the tonnage to the Atlantic basin, which in turn is adding to the supply of ships in the Pacific market.

Surplus ships
The increase in the delivery of newbuilds in 2019 has also added to the gloom. According to shipbroking and consulting firm Banchero Costa, a total of 39.84 million dwt were delivered in 2019, up from 27.38 million dwt delivered in 2018. Demolition during 2019 was a mere 7.50 million dwt.

Shipowners in the Capesize market were also being affected by the arrival of new scrubber-fitted Very Large Ore Carriers, including Valemax- and Guaibamax- class ships, reducing the spot demand for regular Capesize ships during Q4 2019 and early 2020.

Dry bulk freight rates at 3-year low on surplus to....