Despite the push for decarbonization and alternative carbon-neutral fuels in the maritime sector, only a third of dry bulk shipping market participants expect new dry bulk orders to be fueled by these substitutes in the next five years, according to a survey by S&P Global Commodity Insights.

The survey, conducted in November to gauge the mood of dry bulk market participants in the wake of the International Maritime Organization’s greenhouse gas emissions regulations, had 112 respondents consisting of shipowners, ship-operators, charterers, shipbrokers and analysts.

A flurry of new emission regulations slated for introduction next year have made shipowners reluctant to commit to newbuilding orders amid a lack of clarity regarding the most dependable and easily available zero-carbon alternative fuel.

The IMO has made it mandatory for ships to get energy efficiency certification known as the Energy Efficiency Existing Ship Index or EEXI from Jan. 1, 2023, which is based on a vessel’s design parameters.

From 2023, the collection of CO2 emission data also begins for reporting a ship’s annual operational Carbon Intensity Indicator or CII, based on which ships will get an environmental rating from A to E in 2024. A ship assigned a D rating for three consecutive years or an E rating in a single year has to come up with a corrective action plan to improve its rating.

Among the interesting findings from the survey, the majority of participants expected the earnings or returns from different dry bulk segments such as Capesize, Kamsarmax/Panamax and Ultramax/Supramax to remain almost at par with one another over 2023, implying a subdued market next year.
The new emission regulations could also spawn a multi-tier market based on ships’ environmental ratings and energy efficiency specifications, the respondents said.

The uncertainties over regulations and technology for ships using alternative fuels are expected to temper enthusiasm for ordering new dry bulk ships. Among the few new orders that could be made over the next five years, almost 48% of the respondents expect the ships to be powered by fuel oil, while the rest were split between LNG (27%), ammonia (14%) and methanol (11%) as the fuel of choice.

At the moment, most investors remain quite cautious towards building new ships, in part due to the exceedingly high prices demanded by yards, but also in relation to [lack of clarity over} new fuels,” said Marc Pauchet, Director, Dry Bulk Research at Maersk Broker. With no clear indication as to which one will be the best fuel, most owners may rely on the secondhand market to increase their fleet size, he added. 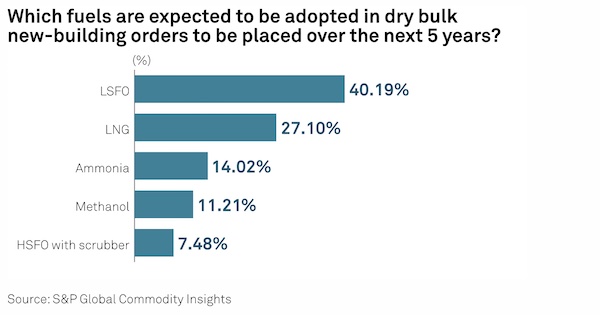 Emarat Maritime Managing Director Rishi Nyati said there were no clear alternatives currently apart from LNG, although it is not an answer to the decarbonization goals the maritime industry has set itself. “Methanol, ammonia and hydrogen are boutique,” Nyati said, adding the aviation sector was looking at biofuels or synthetic fuels on its path to decarbonization.

The cost is high for shipowners to embrace alternative fuels to power their ships, especially for smaller dry bulk segments like Supramaxes and sizes below it, a Sales & Purchase or SnP broker said. “Only 5% of owners, who are well-capitalized, will venture into investing in ships with new technology,” the source said, adding that only a few advanced economies could support these investments with tax breaks and other incentives.

Economic feasibility aside, multiple market sources said many shipyards continued to promote conventional designs based on fuel oil with some provisions to shift to alternative fuels like ammonia or methanol in the future.

“Of course, this changes with a big order from a market leader who is looking at any of the alternative fuels,” a shipbroker source said.

A lack of bunkering ecosystem for the proposed alternative fuels and the consideration of total carbon emissions on a well-to-wake basis are also deterrents to ditching fuel oil.

An improvement in the fuel efficiency of newly designed ships compared with designs from a decade ago is further impeding the switch from fuel oil.

“The fuel consumption of ships with new design is very low and even lower [when sailing at] eco-speed,” a Handysize shipowner source said, adding: “The buffer their eco-speed gives them will help maintain good emission ratings for the next five years at least.”

Since smaller ships are not big fuel-guzzlers, they may also not feel pressured to embrace alternative fuels in the immediate future.

The incentive to adopt newer fuels is also linked to the trade envisioned for the vessel. “A mining giant like Vale using Very Large Ore Carriers [VLOCs] to do a Brazil to China voyage or other Australian miners that need Western Australia to China runs can incentivize owners to go for ships with new technology,” the SnP broker said. 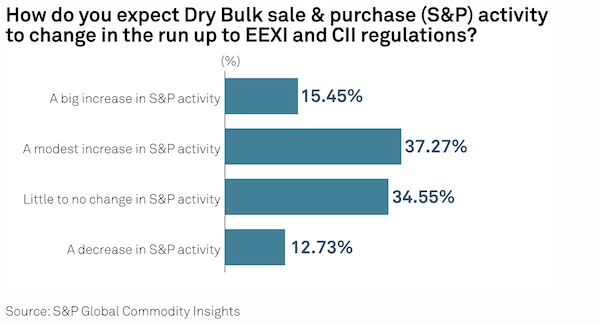 Maritime research consultancy Drewry says about 6.5% of the current orderbook has a dual fuel propulsion system, where vessels can consume either fuel oil or LNG, while another 3.6% are ammonia- or LNG-ready.

Fleets to grow via secondhand market

As the ordering of new ships slumps, activity in the secondhand market is expected to remain robust in 2023, with only 12.73% of survey respondents expecting a slowdown in ships changing hands.

“I do expect the current trend of higher demand for secondhand to continue for the dry bulk sector,” Maersk Broker’s Pauchet said. Market sources also anticipate that high liquidity as well as high prices could be witnessed in the secondhand market, with instances of used ship values going above newbuilding prices in coming years.

Market watchers expect investors to quickly build spot market exposure through the secondhand market due to a lack of slots at yards for delivery of new ships until 2025. “[By] entering the secondhand market now, there will be a two-year period or so where ships can be traded without having to [worry] much about issues regarding fuels, etc.,” the shipbroker source said.