East Coast gasoline inventories in July 2022 were the lowest since October 2014 and remain low as a result of a number of factors affecting supply. One significant factor is Russia’s full-scale invasion of Ukraine, which has disrupted global petroleum product trade and increased competition for fuel supplies in the Atlantic Basin. As a result, less gasoline was imported into the East Coast in 2022 compared with prior years. On average, 24% less motor gasoline was imported into the United States during the first half of 2022 than during the first half of 2021. Another significant factor affecting supply is decreased petroleum production capacity on the East Coast. The Philadelphia Energy Solutions refinery closed in 2019, and the Come-by-Chance refinery in Newfoundland, Canada, was idled in 2020. Between 2018 and 2021, the capacity to produce petroleum on the East Coast declined by about 400,000 barrels per day. Although shipments of petroleum products from the U.S. Gulf Coast to the East Coast have been higher than average, further increases in these shipments are limited by transportation constraints. 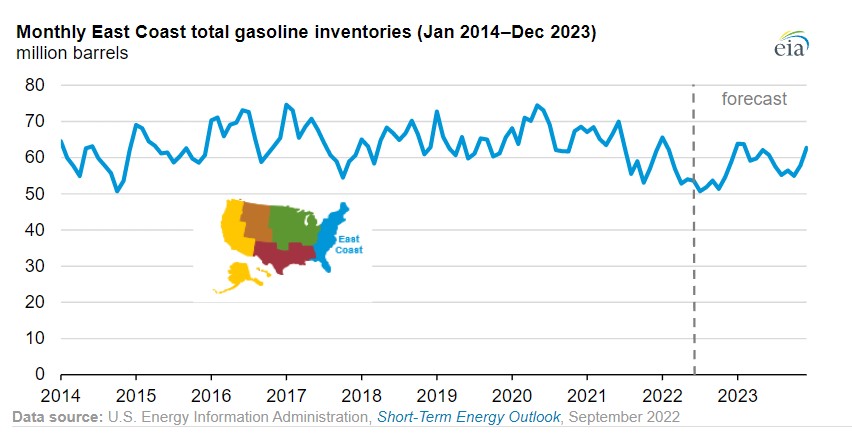 Much of the increase in our forecast inventory over the next few months is due to typical seasonal factors. Less gasoline is consumed in the United States in the fall and winter than in the summer, when drivers tend to travel more. In addition, futures prices for RBOB, the petroleum component of gasoline used in many parts of the country, are generally higher for summer-month delivery than for winter-month delivery. This seasonal structure in RBOB futures prices encourages market participants to build inventory in the fall and winter, before the high-demand summer months.

Although our forecast that inventory will grow in the fourth quarter of 2022 is typical of the season, we forecast the build to be above average, in part, because we expect less demand than on average.