Inflation in the eurozone was already running hot before the war in Ukraine started. Multiple supply shocks due to the pandemic pushed the headline inflation rate up to 5.9% year-on-year in February. A strong economic rebound, supported by ample fiscal and monetary support, broadened the fertile breeding ground for a longer-lasting pass-through of producer prices to consumers, and headline inflation was expected to remain at elevated levels at least throughout the summer rather than gradually retreat.

The war in Ukraine is now adding to these pressures, both in terms of the level of inflation and its duration, with energy and commodity prices shooting up since January, and supply chains disrupted once again. These old and new inflationary pressures have also increased the risk of more second-round effects materialising in the short run. In the medium-term, the impact of the war on inflation will be more complicated: energy and commodity prices are likely to stay high as sanctions and trade tensions will probably remain in place beyond the end of the war, and the speeding up of the green transition will keep prices high, but subdued demand on the back of slower growth and dropping purchasing power is rather likely to be disinflationary.

Energy inflation, how much higher can it go?

Inflation has been increasing mostly on energy prices, which have surged during three recent periods. First, we saw a rebound of energy prices from the first lockdown low, then that was accelerated by low European gas reserves last autumn, and finally, the runup to the war in Ukraine led to further increases in energy prices, including oil. This accumulation of energy price shocks has allowed energy inflation to jump to 32%. Not only does this account for more than half of the current inflation rate, it also adds to significantly higher producer prices for goods and services.

The war has caused a further spike in prices, although volatility in market energy prices is huge at the moment. March will see another increase in energy inflation and the months ahead will still be boosted by serious base effects. This is especially true for gas prices – which are stickier than oil prices – which are set to keep energy inflation elevated over the course of the year and even in 2023 given delayed charging of households. While many scenarios are imaginable at this point, futures do still point to modest declines in prices from current levels, which should result in a slow downward impact on the inflation rate at elevated levels. All in all, energy inflation which was expected to trend down from late last year, has already become a key driver of the higher for 2022 narrative. Forecasting based on current oil and gas futures leads to a contribution of energy to headline inflation of 2.7%. Projecting out using current spot prices would even lead to a contribution of 3.5%. 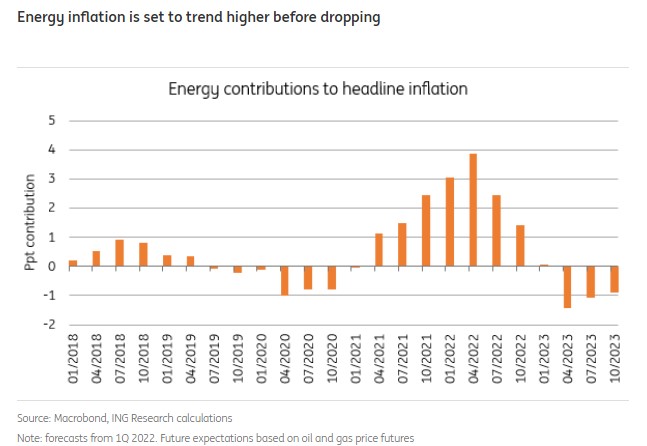 Food inflation is becoming a bigger driver of higher prices

Suffering from high transport costs and harvest problems, global food prices soared to near all-time highs in early 2021. After a brief respite, the increase in prices continued and was starting to have a more substantial impact on consumer food prices in the eurozone in the runup to the war. The war has only added to problems as Ukraine and Russia are key exporters of wheat to the eurozone market. With global food prices soaring again, it looks like food inflation has further to go from here. For March and April, we already expect food inflation to add around 1ppt to headline inflation and it could well be that this increases further on the back of the conflict.

Core inflation has also been running up. The most recent increase in energy and food prices has also been accompanied by higher goods prices stemming from supply chain problems. Transportation problems caused container prices to reach multiples of pre-corona rates and shortages caused prices of various inputs to soar. This has not immediately been priced through to the consumer as higher costs first occurred downstream, businesses have been taking higher costs in their margin, and businesses do not all work with flexible prices. Goods inflation rose markedly in January though and a more narrow category of goods that have been impacted by supply chain problems has already seen inflation rise sharply since July of last year.

While supply chain problems had been abating since November and input shortages were dropping, they have recently reared their head again. The war in Ukraine and new lockdowns in China are adding to supply chain disruptions again, which could keep pressure on consumer goods prices elevated for longer than we initially expected. With supply chain disruptions set to last at least until summer, we think that goods inflation will remain elevated at least until the third quarter of this year. We don’t expect much higher inflation rates though as the impact of slowing demand due to the purchasing power squeeze currently experienced by consumers is set to dampen inflation. 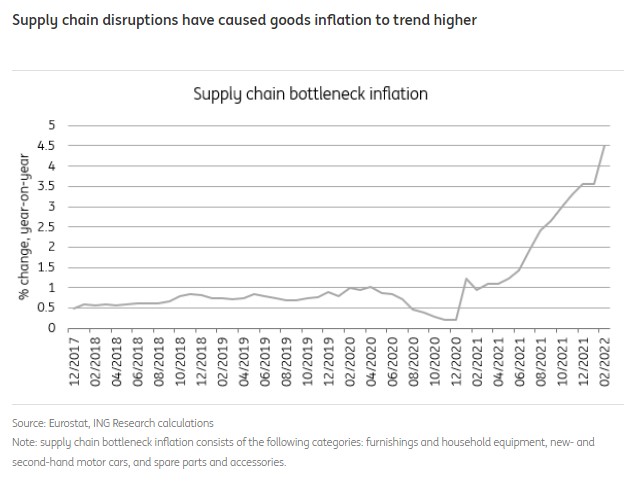 Most of the reopening shock seems to be behind us

Services prices have also been trending higher, mainly thanks to the reopening of economies now that the pandemic is in a less restricting phase. The group of goods and services most affected by lockdowns – air travel, restaurants, clothing stores, and so on – saw declining prices in 2020 and no recovery in early 2021, but prices have been recuperating since. Prices had been growing at about 1.5% in the years leading up to the pandemic, and what we see is that the second half of 2021 saw a catch-up to this trend after which it has settled at the pre-crisis trend again. This suggests that we shouldn’t expect too much from the reopening inflation effect from here on, especially as real wages are being squeezed at the moment. That does not mean that there won’t be a further increase in services inflation from here on though. While reopening effects have faded, second-round effects from higher energy prices and in some service sectors from wages are set to be priced through. That could lead to above-trend services inflation for the months ahead. 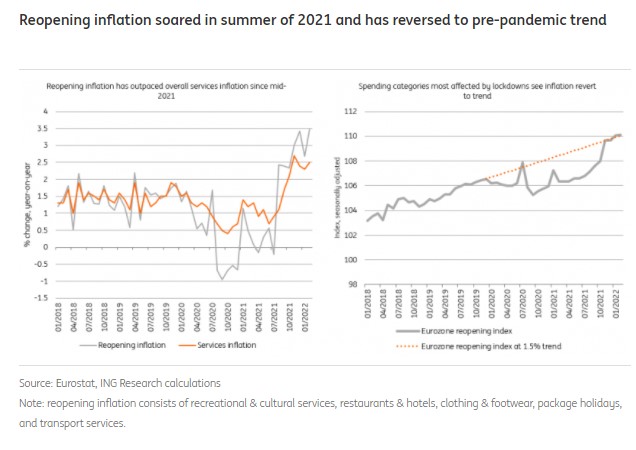 Expect inflation to trend higher in the short-run than previously expected, again. The war is causing commodity prices to spike further and disrupt supply chains more. Don’t be surprised if the peak in eurozone inflation reaches double digits in the coming months, before trending back down again. The cumulation of supply shocks makes the economy far more receptive to pass-through effects that can keep inflation trending higher for a longer amount of time.

The question is what effects on inflation from current developments will be dominant in the medium-term. Supply factors have been driving eurozone inflation to record highs, but with real wage growth at a multiple decade low, a marked economic slowdown or even recession would reduce expectations of demand-side inflation for the medium-term. In fact, our expectations that wage growth will accelerate significantly this year and in 2023 have clearly come under pressure. We do still expect wage growth to trend higher as inflation is a dominant driver of wages which can even drive up wage growth during a recession – look at 2008 for example. However, chances are increasing that companies’ profit margins will come under significant pressure, which is set to lead to a lower peak in wage growth than previously expected.

For the European Central Bank (ECB), this additional inflationary pressure will complicate things even further. Even if headline inflation hits double-digit levels, there is very little the ECB could do to bring imminent relief. Even worse, in a stagflationary scenario, too aggressive tightening could be counterproductive and undermine an increasingly fragile economic recovery. Therefore, we expect the ECB to continue ending its unconventional measures without engaging in a rate hike cycle like the US Federal Reserve. The ECB will focus on inflation expectations. If these expectations remain anchored, we will only see an end to net asset purchases and an end to the era of negative deposit rates by early 2023 at the latest. Only if inflation expectations threaten to de-anchor significantly could we see the ECB feeling urged to send a strong signal stressing its inflation fighter credibility. In such a scenario, the ECB might opt for more aggressive rate hikes; always knowing that downside risks to the economic outlook are increasing and surging government debt makes it harder for some eurozone countries to stomach significantly higher rates.
Source: ING