Highlights
• World oil demand growth is forecast to slow to 1.9 mb/d in 2Q22 from 4.4 mb/d in 1Q22 and is now projected to ease to 490 kb/d on average in the second half of the year on a more tempered economic expansion and higher prices. As summer driving escalates and jet fuel continues to recover, world oil demand is set to rise by 3.6 mb/d from April to August. For 2022, demand is expected to increase by 1.8 mb/d on average to 99.4 mb/d.
• Russia shut in nearly 1 mb/d in April, driving down world oil supply by 710 kb/d to 98.1 mb/d. Over time, steadily rising volumes from Middle East OPEC+ and the US along with a slowdown in demand growth is expected to fend off an acute supply deficit amid a worsening Russian supply disruption. Excluding Russia, output from the rest of the world is set to rise by 3.1 mb/d from May through December.
• Global refinery margins have surged to extraordinarily high levels due to depleted product inventories and constrained refinery activity. Throughputs in April fell 1.4 mb/d to 78 mb/d, the lowest since May 2021, largely driven by China. Between now and August, runs are forecast to ramp up by 4.7 mb/d, but the tightness in product markets is expected to continue based on our current oil demand outlook.
• Global observed oil inventories declined by a further 45 mb during March and are now a total 1.2 billion barrels lower since June 2020. In the OECD, the release of 24.7 mb of government stocks during March halted the precipitous decline in industry inventories. OECD industry stocks rose by 3 mb to 2 626 mb, but remained 299 mb below the five-year average. Preliminary data for April show OECD industry inventories increased by 5.3 mb.
• Crude prices fell in April to trade in a narrow $10/bbl range above $100/bbl. ICE Brent last traded around $105/bbl and WTI $102/bbl. Rapid early-May advances on the sixth round of EU sanctions for Russia drove renewed price tensions. High crude prices and exceptional product cracks are supporting strong inflation trends.

Pressure mounting
Russia’s isolation following its invasion of Ukraine is deepening as the EU and G7 contemplate tougher sanctions that include a full phase out of oil imports from the country. If agreed, the new embargoes would accelerate the reorientation of trade flows that is already underway and will force Russian oil companies to shut in more wells. Even so, steadily rising output elsewhere, coupled with slower demand growth, especially in China, is expected to fend off an acute supply deficit in the near term. Amid the widening supply and demand uncertainties, oil market volatility remains rife, but prices are trading in a lower and narrower $10/bbl range above $100/bbl. Brent last traded at $ 105/bbl and WTI $102/bbl.

Despite mounting international pressure and falling oil production, Russian exports have so far held up by and large. But now major trading houses are winding down deals ahead of a 15 May deadline to halt all transactions with state-controlled Rosneft, Gazprom Neft and Transneft. Following a supply decline of nearly 1 mb/d in April, losses could expand to around 3 mb/d during the second half of the year.

Limited spare capacity in the global refining system, together with reduced exports of Russian fuel oil, diesel and naphtha have aggravated the tightness in product markets, which have now seen seven consecutive quarters of stock draws. While a first tranche of SPR releases halted the precipitous decline in OECD industry stocks in March, crude made up the majority of it and product stocks have continued to fall. Notably, middle distillate reserves reached their lowest levels since April 2008. 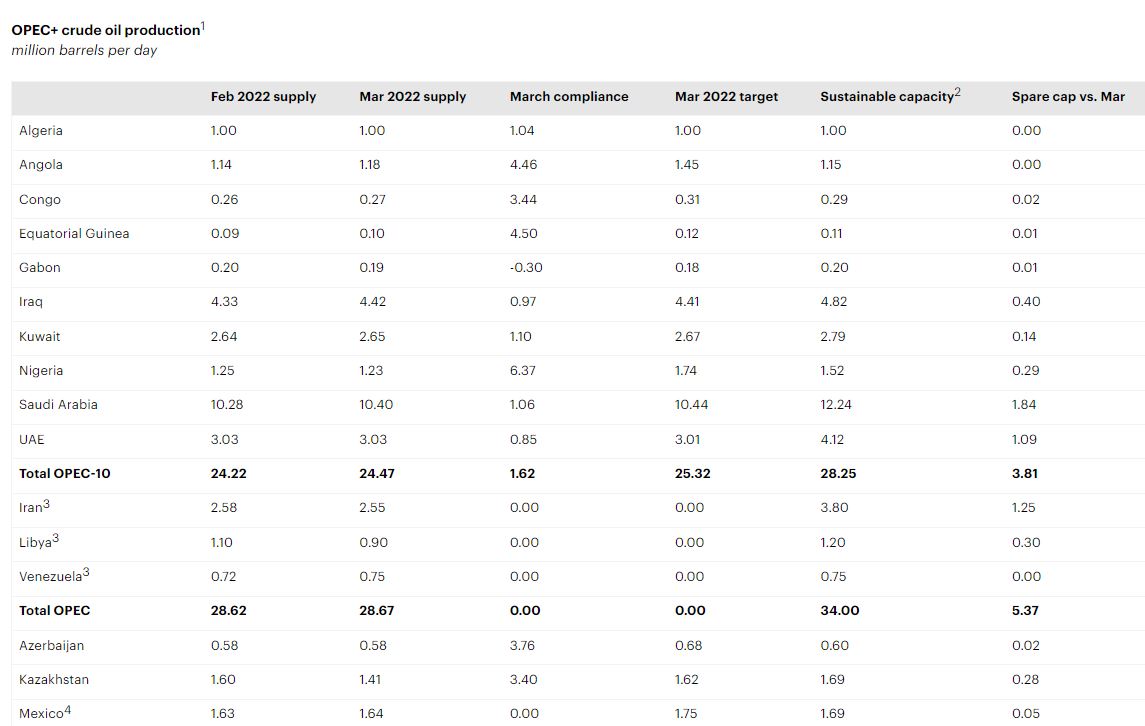 Soaring pump prices and slowing economic growth are expected to significantly curb the demand recovery through the remainder of the year and into 2023. Moreover, extended lockdowns across China where the government struggles to contain the spread of Covid-19 are driving a significant slowdown in the world’s second largest oil consumer. For the year as a whole, global oil demand is forecast to average 99.4 mb/d in 2022, up 1.8 mb/d y-o-y.

As restrictions in China ease, summer driving picks up and jet fuel continues to recover, world oil demand is set to rise by 3.6 mb/d from an April low through August. If refiners cannot keep pace, product markets and consumers could come under additional strain. The IEA’s recent 10-Point Plan to Cut Oil Use outlines measures that can be taken immediately to cut consumption and ease the pain caused by high oil prices.

IEA Expects Oil Market To Fend off an Acute Supply....