Imports moved into positive territory for the first time since March, sending the trade deficit to a 25-month high of $15.44 billion in December against $9.87 billion in the previous month.

Exports also saw a marginal growth of 0.14 per cent in December — only the third month in 2020 to show expansion — fuelling optimism about an economic recovery.

Outbound shipments were $40 million higher at $27.15 billion over $27.11 billion a year ago on the back of drugs and pharmaceuticals, electronics, and gems and jewellery exports. Oil exports continued to decline, with a 35.35 per cent fall year-on-year (YoY).

“While intermittent hiccups may persist, we are hopeful that the performance of exports will strengthen in the coming months, as the vaccine rollout gathers speed in the major trading partners,” said Aditi Nayar, principal economist at ICRA.

If oil and gems and jewellery sectors were taken out from the export basket, outbound shipments grew 5.50 per cent at $22.22 billion last month against $21.6 billion in December 2019.

Prahalathan Iyer, chief general manager, India, at Exim bank, said this indicates a pick-up in manufacturing activity in the country.

Sharad Kumar Saraf, president of exporters’ body FIEO, said 2021 has brought optimism and the vaccine rollout is expected to bring the economy back on growth trajectory, with a V-shaped recovery in world trade.

Non-oil, non-gold imports grew almost 8 per cent in December at $28.52 billion versus $26.41 billion in the corresponding month last year. 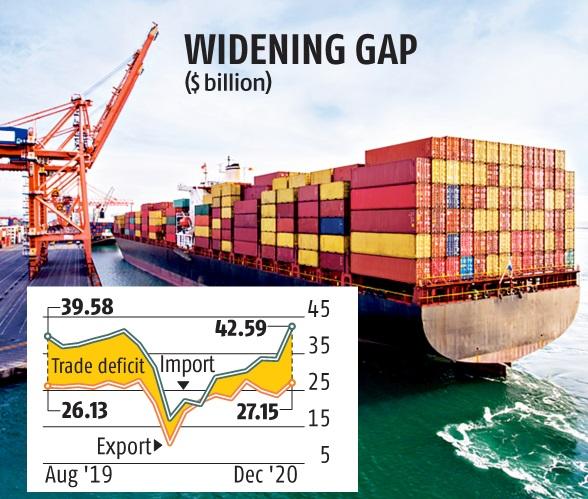 chartThis category of imports mostly declined in 2020. Their shift to the growth path showed that industrial demand in the economy has picked up in December, which would have repercussions for factory production as well as larger economic growth. The index of industrial production (IIP) declined 1.9 per cent in November after rising over four per cent in October. Growth in non-oil, non-gold imports showed that IIP might pick up in December.
“The trade deficit was driven by a surge in non-oil imports that was exaggerated by pent-up demand,” said Nayar.

On December numbers, Trade Promotion Council of India Chairman Mohit Singla said resilience of industry has challenged all adversity to buck the trend. “This growth comes amid a challenging trade environment, especially with the rise in protectionist measures by a number of countries.

Additionally, this performance comes indicating below-trend expansion in the first and second quarter,” he said.

Engineering exporters body EEPC India said exporters continue to face headwinds of extreme nature as the major economies are in the midst of a demand recession. The domestic picture of rising cost of raw material like steel aggravated the situation, it said.

Meanwhile, the estimated value of services export was $17.31 billion, while that for imports was $10.32 billion. This led to an overall surplus in merchandise and services trade at $5.22 billion in the first nine months of FY21, compared to the deficit of $ 64.09 billion a year ago.

Nayar expected the current account surplus to sharply reduce to sub-$2 billion in Q3, from $15.5 billion in Q2.

She did not rule out a small current account deficit in Q3.