The United States is expected to add between 16 billion cubic feet per day (Bcf/d) and 17 Bcf/d of natural gas pipeline capacity in 2019, most of which was built to provide additional takeaway capacity out of supply basins. Of the 134 active natural gas pipeline projects the U.S. Energy Information Administration (EIA) tracks, 46 have entered or are expected to enter service in 2019. These projects will increase deliveries by pipeline to Mexico or to liquefied natural gas (LNG) export facilities in the Gulf Coast region. 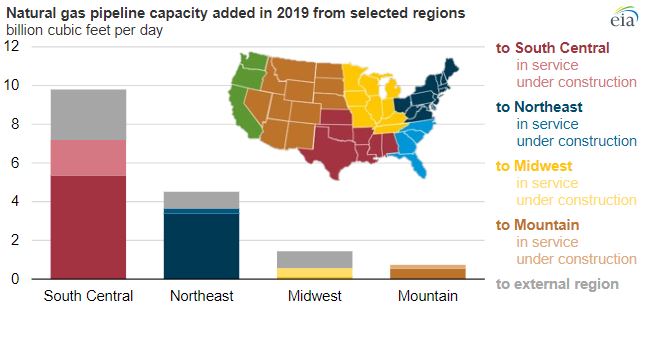 The remainder of the natural gas pipeline projects slated for completion in the South Central region in 2019 will deliver natural gas to demand centers, in particular to LNG export facilities on the Gulf Coast. Cheniere’s 1.4 Bcf/d MIDSHIP Pipeline is still under construction. When completed, it will connect natural gas supply from Oklahoma to the Sabine Pass LNG facility in Louisiana, providing additional sources of secure supply to the export terminal.

The Texas East Transmission Company (TETCO) completed expansions to its existing pipeline infrastructure during the second quarter of 2019, including the 400 MMcf/d Stratton Ridge Expansion, for additional deliveries to the Freeport LNG facility on the Texas Gulf Coast.

The only pipeline project in the South Central region in 2019 that moves natural gas outside its region is the 2.6 Bcf/d Valley Crossing Pipeline, which exports to markets in Mexico. This pipeline connects to the newly built Sur de Texas-Tuxpan pipeline, a 497-mile underwater project that was also completed in 2019 and transports U.S. natural gas to the southern Mexican state of Veracruz. 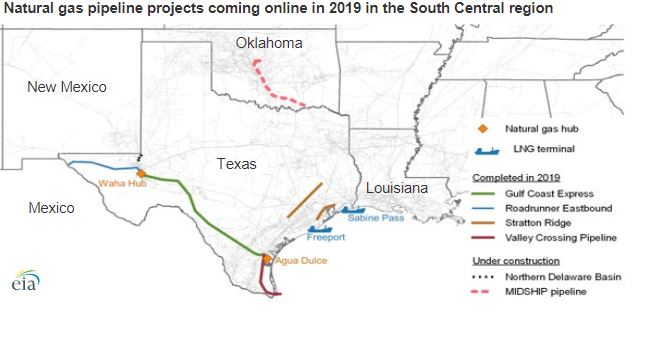 The remainder of the new pipeline capacity in the Northeast connects natural gas supply to the NEXUS pipeline in the Midwest (the completed Appalachia Lease Project Phase 2) or to market hubs within the Northeast.