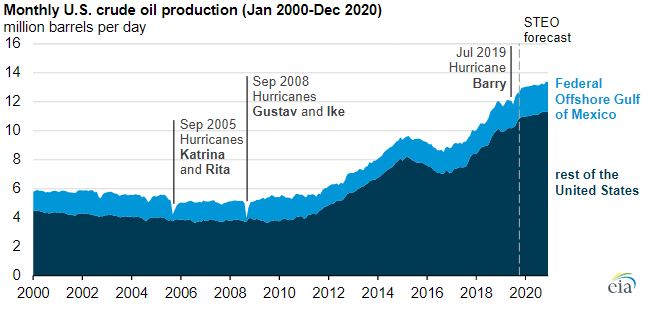 Crude oil production in the Federal Offshore Gulf of Mexico fell by 332,000 b/d in July when some production platforms were evacuated in anticipation of Hurricane Barry. According to information from the U.S. Department of the Interior’s Bureau of Safety and Environmental Enforcement (BSEE), 283 offshore oil and gas platforms in the Gulf of Mexico (about 42% of the regional total) were evacuated in mid-July as Barry approached.

In developing crude oil production forecasts for each month’s Short-Term Energy Outlook, EIA uses the latest data from the Petroleum Supply Monthly and Weekly Petroleum Status Report, among other sources. As a result, EIA had already accounted for estimates of Hurricane Barry’s effect on crude oil production in the Gulf of Mexico in the August edition of the STEO.