The 2020 release of Rystad Energy’s annual global energy outlook reveals that the Covid-19 downturn will expedite peak oil demand, putting a lid on exploration efforts in remote offshore areas and as a result reducing the world’s recoverable oil by around 282 billion barrels.

Global total expected remaining recoverable oil resources decrease to 1,903 billion barrels, 42% of which are in OPEC territory, with the remaining 58% located outside the alliance.

OPEC countries are much more resilient to the current crisis and will only lose a fraction compared to their non-OPEC counterparts such as the US (-49 billion barrels) and Russia (-31 billion barrels).

Rystad Energy releases its annual outlook following the publication of the BP Statistical Review to provide an independent, solid and clear comparison of how the year has changed the world’s energy landscape.

• In the US we expect lower upstream activity in shale acreage, less exploration in the Gulf of Mexico, and a reduced number of licensing rounds on the Atlantic West Coast. In total, this decreases recoverable resources by 49 billion barrels.
• Canada will likely see more high-cost oil sands reserves left in the ground (14 billion barrels) due to increased environmental, social, and governance (ESG) concerns.
• Mexico will likely see reduced exploration for deepwater and shale oil reserves.
• In Brazil, more pre-salt reserves will likely be left in the ground.
• With no normalization in sight, Venezuela’s actual reserves potential falls further by 21 billion barrels.

• As the clear winner of the OPEC+ agreement, Saudi Arabia is expected to add 25 billion barrels to future production potential despite peak oil coming sooner.

• China’s proven reserves are actually up, but future prospective resources are weighed down by low shale exploration, so the net result is negative.
• In Iran, the risk of prolonged sanctions reduces recoverable reserves potential by 18 billion barrels.
• For Australia, we expect reduced exploration in new basins. 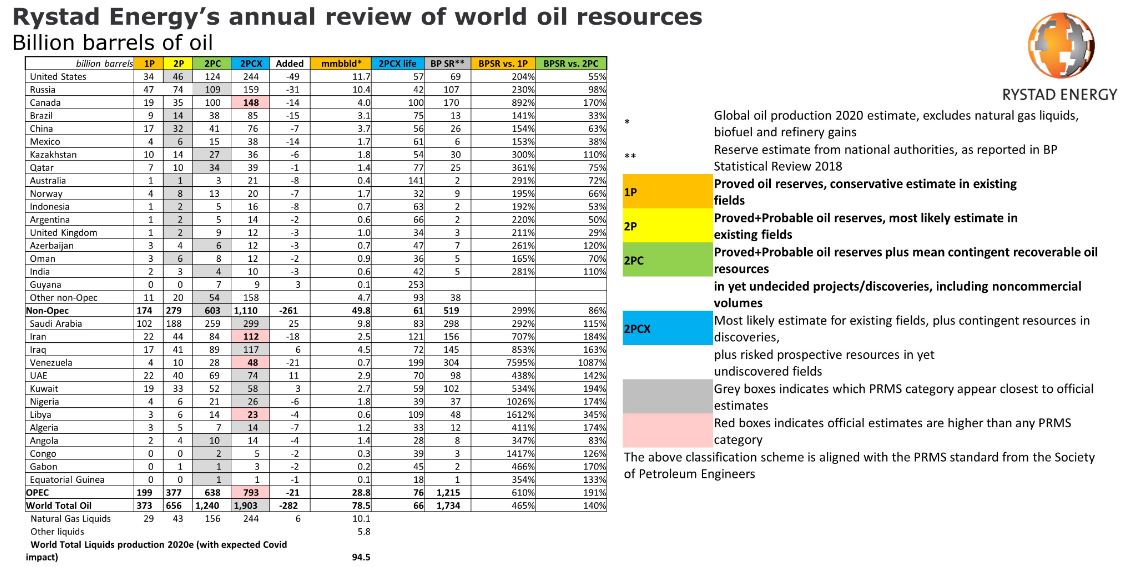