Due to the combined effect of the Covid-19 pandemic and the low oil prices, US shale operators are reducing spending, production and overall activity in 2020. Although the country’s oil production was previously poised for annual growth of 8.1%, based solely on interpretation of operators’ guidance, Rystad Energy is projecting a decline of at least 2.7% year-on-year (US Lower 48 excl. Gulf of Mexico).

As shut-ins, reductions in spending and activities weigh in, the fourth quarter of 2020, which was projected to see a year-on-year oil production increase of 650,000 barrels per day, is now instead forecast to see a reduction of 1.5 million bpd. In other words, production for the quarter will be lower by some 2.15 million bpd compared to what was expected before the Covid-19 crisis.

US oil production in the fourth quarter of 2019 averaged around 10.4 million bpd. For all of 2020, it is now expected to fall to about 9.6 million bpd from 9.9 million bpd in 2019. These numbers are, as stated above, based solely on company guidance, and our own 2020 forecast is slightly more pessimistic as we expect production to decline further to 9.5 million bpd, down around 4% from 2019.

“The production slide in 2020 may accelerate even further, as private operators are likely to respond faster with decisions of additional activity cuts. Also, production curtailments that could be implemented by a larger number of operators could lower the actual oil output even more,“ says Rystad Energy Vice President North American Shale and Upstream Veronika Akulinitseva. 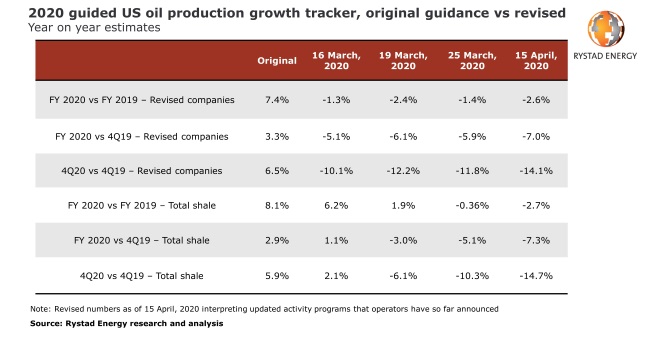 Over the last weeks, Rystad Energy has registered additional capital budget reductions communicated by a number of US shale operators. In total, all revised US shale producers combined have so far reported plans to slash 38% off their previously announced 2020 capital budgets, which implies a cut of nearly 42% compared to 2019 spending.

Some of the producers have clearly communicated new expected oil production volumes for the year, while the potential impact for the others has been estimated by Rystad Energy’s shale team.

It should be noted that these numbers could represent rather conservative estimates as the approach used assumes the same impact on wells put on production (POPs) as on spudded wells and does not account for additional acreage upgrading, increased focus on sweet spots and potential production efficiencies that are likely to be realized by these producers.
Source: Rystad Energy