In a remarkable turnaround, the second quarter of 2019 is the first three-month period on record when US shale operators achieved positive cash flow from operations after accounting for capital expenditures, according to Rystad Energy.

Rystad Energy – the independent energy research and consultancy in Norway with offices across the globe – has studied the financial performance of 40 dedicated US shale oil companies, focusing on cash flow from operating activities (CFO). This is the cash that is available to expand the business (via capital expenditure, or capex), reduce debt, or return to shareholders.

In the second quarter of 2019, 35% of operators in the peer group balanced their spending with operational cash flow, and reported an accumulated $110 million surplus in CFO versus capex.

“That is an industry first,” says Rystad Energy senior analyst Alisa Lukash. “The five dollar increase in the average WTI oil price from the first to the second quarter of 2019, coupled with operators’ efforts to keep spending within their initial budgets, resulted in a slight surplus of adjusted CFO for total capex.” 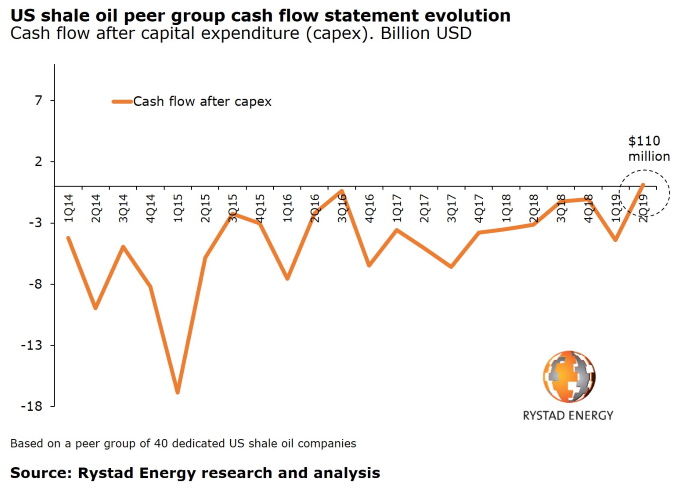 Lukash also notes that many operators managed to achieve positive earnings in the second quarter, and that accumulated profit was significantly depressed by Anadarko Petroleum’s $1 billion transactional costs associated with the Chevron merger termination fee.

The shale industry has been under significant pressure to balance capex with operational cash flow, while maintaining robust production growth and generating extra cash on stock repurchase and dividend programs.

With negative cash flows, shale companies have historically relied on bond markets to finance their operations. Without additional funding and any debt refinancing, capex would have to be cut. 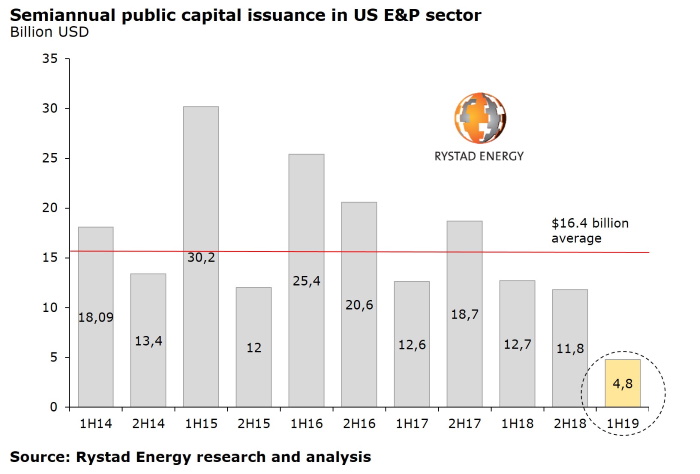 In the first half of 2019, US E&P companies raised a record low $4.8 billion, compared to an average semiannual issuance of $16.4 billion since 2014. No pure US shale operator has made a public offering since Magnolia Oil & Gas’ initial public offering in 2017.

“This leaves the industry with fewer options to boost capital guidance throughout the remainder of 2019, as operators had significantly frontloaded capital budgets this year, leaving 46% of guided capex for the second half of the year,” Lukash remarked.

It is important to note that the slowdown in spending doesn’t directly translate into the elimination of production growth, as there is a natural lag between budgeted capital, fracking, completion and first oil.

The top 40 US shale producers – accounting for nearly half of total US shale oil production – have shown a 3% quarterly increase in their drilling and completion capital expenditure as of the second quarter of 2019, and a 7% jump in the number of completed wells over the same period. Horizontal oil completion activity also picked up in the second quarter.

“As strong fracking has already been confirmed for the second half of the year, we do expect robust completion activity to persist in the third quarter, before slowing down in the final quarter of 2019,” Lukash said.