The challenge: evaluating fiscal terms to encourage exploration
The government of Ireland wanted to unlock potential in its offshore oil and gas industry.

While there had been relatively little exploration activity in Ireland’s offshore and only 3% of the total wells drilled had resulted in commercial discoveries, international interest in the area had increased following successes in other parts of the Atlantic Margin.

Ireland’s Department of Communications, Energy and Natural Resources commissioned us to conduct a review of fiscal terms and to make recommendations to ensure the most appropriate terms were in place for future licensing rounds.

With the high cost of exploration in Ireland’s offshore and highly uncertain success rates, striking the right balance between risk and reward was a critical factor in our review.

Our approach: expert analysis to support informed decision making
The main objective was to assess whether Ireland’s fiscal terms were fit for purpose and to recommend a system that would be most appropriate for future licencing rounds.

Our work had four main aspects:

Throughout the process, we met with a wide range of stakeholders, including oil industry representatives, members of the Irish parliament, government and trade union officials, economists and others who had expressed an active interest in Ireland’s offshore industry.

To attract investment, Ireland’s fiscal terms needed to be competitive against a group of countries with similar exploration profiles. Leveraging our knowledge of fiscal regimes across the globe, we benchmarked Ireland’s system against its peers, assessing multiple factors including fair share, prospectivity, costs, transparency and competitiveness. 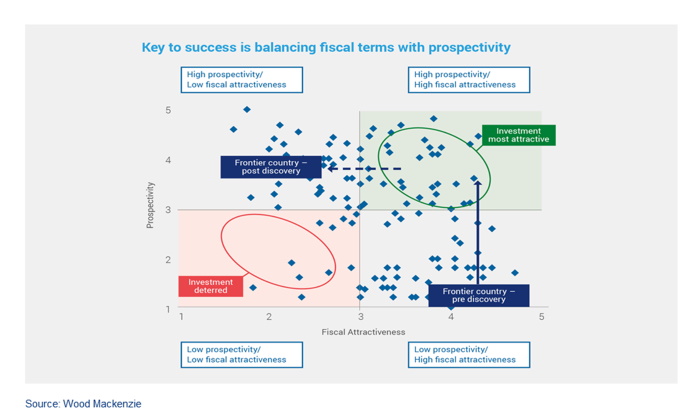 The results: renewed fiscal regime boosts activity in Ireland’s offshore
The final report recommended that the Irish government should:

1. Strengthen fiscal terms for new exploration licences, to provide for an increase in the overall State take and ensure an earlier share of revenue for the State.

2. Make no retroactive change to fiscal terms for existing licences.

What was the impact?
By conducting this review, the government intended to encourage further exploration in Ireland’s offshore and to ensure its fiscal system struck the right balance between risk and reward for all parties.

The subsequent successful licensing round demonstrates that the renewed regime helped to boost interest in Ireland’s oil and gas potential.

While there have been no further commercial discoveries in Ireland’s offshore to date, investment in exploration has increased over the last few years, and there is a positive outlook for the sector.