In 2018, the United States consumed more energy than ever before

Primary energy consumption in the United States reached a record high of 101.3 quadrillion British thermal units (Btu) in 2018, up 4% from 2017 and 0.3% above the previous record set in 2007. The increase in 2018 was the largest increase in energy consumption, in both absolute and percentage terms, since 2010.

Consumption of fossil fuels—petroleum, natural gas, and coal—grew by 4% in 2018 and accounted for 80% of U.S. total energy consumption. Natural gas consumption reached a record high, rising by 10% from 2017. This increase in natural gas, along with relatively smaller increases in the consumption of petroleum fuels, renewable energy, and nuclear electric power, more than offset a 4% decline in coal consumption.

Natural gas consumption in the United States reached a record high 83.1 billion cubic feet/day (Bcf/d), the equivalent of 31 quadrillion Btu, in 2018. Natural gas use rose across all sectors in 2018, primarily driven by weather-related factors that increased demand for space heating during the winter and for air conditioning during the summer. As more natural gas-fired power plants came online and existing natural gas-fired power plants were used more often, natural gas consumption in the electric power sector increased 15% from 2017 levels to 29.1 Bcf/d. Natural gas consumption also grew in the residential, commercial, and industrial sectors in 2018, increasing 13%, 10%, and 4% compared with 2017 levels, respectively. 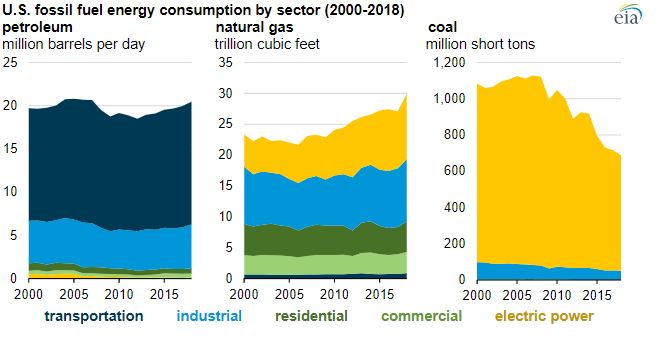 Coal consumption in the United States fell to 688 million short tons (13 quadrillion Btu) in 2018, the fifth consecutive year of decline. Almost all of the reduction came from the electric power sector, which fell 4% from 2017 levels. Coal-fired power plants continued to be displaced by newer, more efficient natural gas and renewable power generation sources. In 2018, 12.9 gigawatts (GW) of coal-fired capacity were retired, while 14.6 GW of net natural gas-fired capacity were added.

Nuclear consumption in the United States increased less than 1% compared with 2017 levels but still set a record for electricity generation in 2018. The number of total operable nuclear generating units decreased to 98 in September 2018 when the Oyster Creek Nuclear Generating Station in New Jersey was retired. Annual average nuclear capacity factors, which reflect the use of power plants, were slightly higher at 92.6% in 2018 compared with 92.2% in 2017.